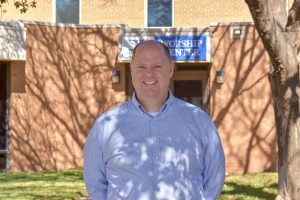 Adam Pardue has been our Pastor since March of 2012. He has been in full-time ministry for nearly 20 years, but this is his first Senior Pastorate. Adam has a Bachelors Degree in Music from Lamar University, a Masters Degree from Wayland Baptist University in Christian Ministry and his Masters of Divinity from BH Carroll. He plans to continue his education and pursue a Doctorate. Adam is married to Angie whom he met near his hometown. Adam and Angie were married on December 27, 1997. They have two beautiful girls, Avery and Abbey who have given their lives to Jesus and are enrolled at Heritage Middle School. Both girls love family time, soccer, dancing and playing outside.Before coming to Lubbock, Adam has served in four other churches including positions as Associate Pastor, Student Minister, Music Minister, Outreach Minister, and Activity Minister. Most of that time however he spent being a Student Minister, which he left just a couple of years ago to be an Associate Pastor. Adam loves spending time with his family, watching sports and working. He also loves people and enjoys this new role as pastor. Adam has already set a new tone at Highland making sure that Highland reaches its potential as a multi-generational and multi-cultural church. Adam also has a passion for the lost and missions. Listen closely and you will certainly hear him say, “Beyond the Walls” regularly as he encourages Highland to be the hands and feet of Jesus “Beyond the Walls” of our church building.

John came to Highland Baptist Church in 2013. John was born and raised in East Texas and accepted Christ as his Lord and Savior at the age of 17. John and Rebekah married on December 17, 2005, and they have a son named John Micah and a daughter named Alice Dawn. John has served as Youth Minister at Jay Valley Baptist Church in Longview, Texas, Business Administrator at Oakland Heights Baptist Church in Longview, Texas, and Family Pastor at Trinity Baptist Church in Henderson, Texas. John attended Kilgore College and The University of Texas at Tyler where he graduated with a Bachelor of Business Administration. John also received a Master’s Degree in Christian Education from Southwestern Baptist Theological Seminary in Fort Worth, Texas. John enjoys spending time with his family, music, hunting, umpiring baseball and working on home improvement projects.